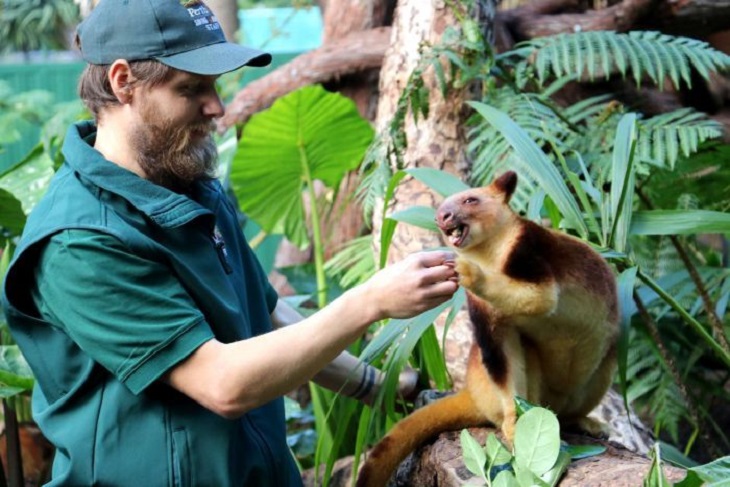 Australia's Perth Zoo is celebrating the successful birth of a rare and endangered tree kangaroo, which became the first of its kind to be born at the zoo in 36 years.

The six-month-old joey, named Mian, is a Goodfellow's Tree Kangaroo, which is a globally endangered species. Mian was born six months ago, but the Perth Zoo only revealed the news this week.

Australian zookeeper Kerry Pickles explained the significance of Mian's birth in terms of the global efforts to save the species.

"The successful birth is not only a cause for celebration for Perth Zoo, but also a boost for the World Zoo Association global breeding programme," Pickles told the Perth Zoo's website on Friday.

"Goodfellow's Tree Kangaroos, which are native to Papua New Guinea (PNG), are so endangered that zoos around the world have banded together to coordinate breeding with the aim to reverse their decline," said Pickles.

Mian's birth now makes him one of only 15 males in the global species management programme, and means he will provide "valuable genetics" when he reaches breeding age.

The global programme is responsible for the birth, after mating Mian's mother Kaluli with a male tree kangaroo named Huli, who arrived from Queensland last year after being identified as the best genetic match.

Mian is now beginning to leave Kaluli's pouch and becomes independent, the zoo said on its website.

Tree kangaroos remain in their mother's pouches for about six to eight months before testing out their arboreal legs. Perth Zoo keepers were able to monitor the development of the joey after training the mother to have her pouch checked.

"The joey was first confirmed in Kaluli's pouch, when it was estimated to be only four days of age. We used a small camera to ensure the least intervention to the tree kangaroo mother," Pickles said.

Pickles said the zoo learnt some invaluable information about tree kangaroos during the process.

"We were able to see when toe nails developed, when Mian's eyes opened, his first smattering of fur and when he started to poke his head out of his mother's pouch," she said.

The Perth Zoo works in conjunction with the Tenkile Conservation Alliance, who is based in the mountains of Papua New Guinea (PNG), and works to protect and look after tree kangaroos in the wild.

The organization works with more than 50 PNG communities to protect tree kangaroos. Perth Zoo's fundraising has helped identify the proper population data on the animals, as well as education and community development programs.