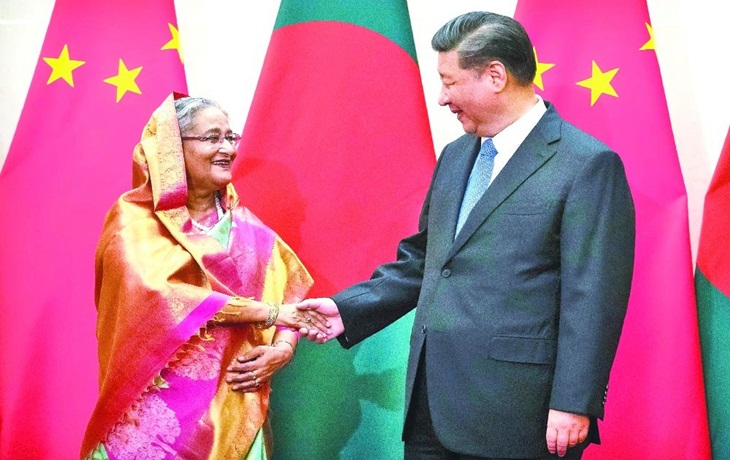 Chinese President Xi Jinping on Friday agreed that there should be a quick solution to Rohingya crisis so that the displaced people can go back to their homeland soon.

“The two leaders agreed that the Rohingya crisis will have to be solved quickly. It can’t be kept unsolved anymore. Two years have elapsed after signing the agreements. There’s not any difference in opinion,” Foreign Secretary Md Shahidul Haque said while briefing reporters after a bilateral meeting between Prime Minister Sheikh Hasina and Chinese President Xi Jinping here.

The meeting was held at Diaoyutai State Guest House in Beijing, the Chinese capital, in the afternoon.  Foreign Secretary Shahidul Haque said there is no difference in opinion between China and Bangladesh over how to resolve the crisis.

“The solution is that the Rohingyas will have to return to their homeland,” he added.

At the meeting, Prime Minister Sheikh Hasina said Bangladesh is now hosting 1.1 million Rohingyas, which is a big challenge for Bangladesh. It has emerged as environmental and security challenges and trafficking problem in particular, she added.

Xi Jinping said their (China) goal is also the quick return of the Rohingyas to their homeland.

“This is why they said Myanmar state councillor minister who overseas Rohingya affairs may visit Bangladesh,” said Shahidul Haque.  Xi Jinping had a number of queries and the Prime Minister also raised the gravity of the Rohingya crisis nicely.

The Rohingya issue continued also during the dinner hosted by the Chinese President, said the Foreign Secretary.
“At the meeting, it was agreed that the representatives of the two countries will work together. They’ll also use their goodwill on Myanmar,” said Shahidul Haque.

The Prime Minister told the Chinese President that the Rohingyas do not want to go back to Myanmar as they are afraid of the recurrence of persecution there. She also requested China to use its goodwill in this regard.  In response, Xi Jinping said there is very slim possibility of recurrence of such things as there is international attention on it.

He said they will try as much as possible in this regard as both Bangladesh and Myanmar are close friends of China. China treats the two friends equally, he added.

Turning to the projects being implemented with Chinese assistance in Bangladesh, Hasina said during the Chinese President’svisit to Bangladesh in 2016, 27 agreements and MoUs were signed between the two countries to implement a number of projects in Bangladesh.

She put emphasis on expediting the implementation process of the projects.

Hasina requested the Chinese President to ease the terms and condition of loan agreements fortimely disbursement of fundfor expediting the implementation process of the projects.

In response, Xi Jinping said he will take proper measures about the matter.

Talking about trade and investment issue, the Prime Minister said Chinese companies should invest in Bangladesh with a buyback facility to ease the big trade imbalance against Bangladesh.

Noting that two economic zones remain designed for Chinese companies in Bangladesh, she said the Chinese entrepreneurs can make investment also in other economic zones as her government setting up 100 economic zones in the country.

In response, the Chinese President said they are aware about it and will make all sorts of effort to reduce the trade imbalance.

He said they encourage the Chinese investors to invest in Bangladesh.

The Chinese side discussed the trade gap issue very rationally rather than arguing that there is no enough products to import from Bangladesh to reduce the trade gap, said the foreign Secretary. “Which I think a very positive discussion,” he said.

There was convergence of options over multilateralism between the two leaders, said the Foreign Secretary.

The Bangladesh Prime Minister sought Chinese assistance for implementing the Delta Plan 2100 and setting up a Climate Adaptation Centre, and implementation of Teesta River Comprehensive Management and Restoration project.

In response, the Chinese President assured that they help set up the Climate Adaptation Centre and consider extending Chinese assistance for Teesta River Comprehensive Management and Restoration Project.

Both the sides committed that China and Bangladesh will work together in the United Nations, said the Foreign Secretary.

At the meeting, the two sides gave very importance over BCIM economic corridor saying the corridor initiative will have to be revived working together with India. The BCIM corridor will open a new market for China, Bangladesh, India and Myanmar, they said.

Chairperson of National Advisory Committee for Autism and Neurodevelopment Disorders Saima Wazed Hossain, Foreign Minister Dr AK Abdul Momen, PM’s Private Industry and Investment Adviser Salman F Rahman and State Minister for Foreign Affairs Md Shahriar Alam were, among others, on the Bangladesh side during the bilateral talks between the two prime ministers.

The Prime Minister joined a banquet hosted by the Chinese President at the Diaoyutai State Guest House.

The foreign secretary said the talks between the two leaders took place in a very cordial environment. The discussion was very friendly and open which expressed different equation and chemistry, he said.

Haque said, “The body language which we saw during the talks is very encouraging. When the Chinese was leaving banquet, he told the prime minister that we continue to remain true friend of each other.”

“Through the comment, the relations between the two leaders have been expressed,” he said.

“Simultaneously we see that a mature narrative has come out in the context of relations of the two countries,” Haque said.

He said the Chinese president also mentioned that Bangladesh is a friendly neighbour of China. “We both neighbours are in crucial phase of development,” he said quoting the president.

Jinping highly appreciated Bangladesh’s GDP growth and both countries could learn from each other’s development.

The foreign secretary said the two leaders put emphasis that their goal is the development of people.

He said the Chinese president pointed out that there are common understandings between the two countries both on the national policy level and international level.

Many things could be learnt from China: PM