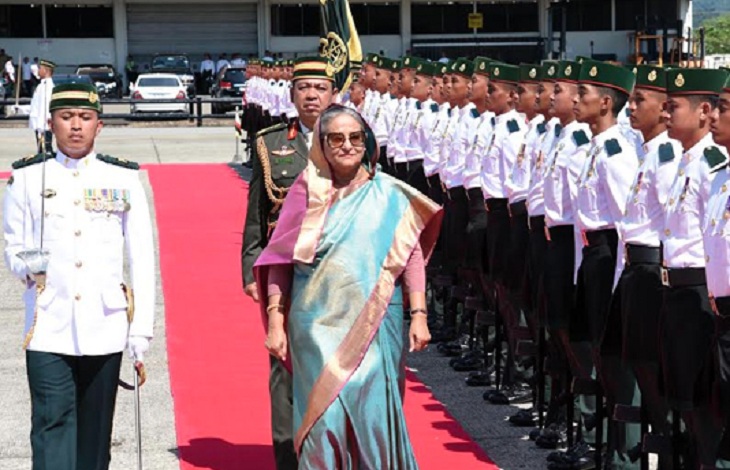 Brunei rolled out a red carpet after Prime Minister Sheikh Hasina reached Bandar Seri Begawan this afternoon on a three-day official visit at the invitation of the kingdom’s Sultan Haji Hassanal Bolkiah.

A special flight of Biman Bangladesh Airlines carrying the premier and her entourage members has landed at Brunei International Airport in Bandar Seri Begawan, the Brunei capital around 2.35pm local time.

A smartly turned out contingent of the Royal Guard gave the premier the guard of honour.

The Bangladeshi PM accompanied by the crown prince took salute from a decorated makeshift dais while the national anthems of the two countries were played.

The premier inspected the guard of honour.

After the official welcome function, a ceremonial motorcade escorted the prime minister to Empire Hotel and Country Club, where she will be staying during her visit.

On the first day of the visit, Sheikh Hasina will join a community reception to be hosted in her honour by the expatriate Bangladeshis in Brunei at Indera Samudera Ballroom of Empire Hotel and Country Club.

The prime minister will attend a dinner to be hosted by the high commissioner of Bangladesh to Brunei the same day.

On Monday morning, Sheikh Hasina will have a general audience with Sultan Haji Hassanal Bolkiah and Royal family at Cheradi Laila Kenchana at the Istana Nurul Iman, the official residence of the Sultan.

After the audience, the prime minister will hold bilateral talks with the Sultan at Baitul Mesyuarah in Istana Nurul Iman.

She will visit Jame Asr Mosque and offer Asr prayers there. Sheikh Hasina will attend official banquet to be hosted in her honour by the Sultan at Istana Nurul Iman.

On Tuesday morning, the prime minister will lay the foundation stone of new Chancery Building of Bangladesh High Commission at the Diplomatic Enclave at Jalan Kebangsaan in Brunei capital.

Later, she will visit Royal Regalia Museum. Sheikh Hasina will leave Brunei for home at 5 pm local time and reach Hazrat Shahjalal International Airport in Dhaka in the evening.

During the visit, Bangladesh is likely to sign seven Memorandums of Understanding (MoUs) with Brunei on various sectors. “We’ve already finalized six MoUs on various sectors, while one is under consideration,” Foreign Minister Dr AK Abdul Momen told a news briefing at the foreign ministry here on Thursday.

Apart from boosting relations between the two countries, the foreign minister hoped that the visit would be very successful in increasing bilateral trade relations.

“We do believe that the prime minister’s visit will further strengthen the bilateral relations as well as cooperation on energy, trade, investment, agriculture, food, air connectivity, human resource development, tourism and technology between the two countries,” he said.

Brunei has already expressed its keen interest to invest in Bangladesh’s different sectors, especially agriculture and energy fields, he said.

Momen said Brunei is an important partner of Bangladesh in the international arena as the country is a member of both the OIC (Organisation of Islamic Cooperation) and ASEAN (Association of Southeast Asian Nations).

The foreign minister said Bangladesh will discuss with Brunei about safe repatriation of Rohingyas to Myanmar from Bangladesh during the visit.

“Wherever we are going, we are raising the Rohingya repatriation issue with highest importance… so it will also get priority during the Brunei visit in particular as they (Brunei) are member of ASEAN,” he said.

Brunei is a Southeast Asian country consisting of two unconnected parts with a total area of 5,765 square kilometres on the island of Borneo. It has 161 kilometres of coastline next to the South China Sea, and it shares a 381 km border with Malaysia.

Brunei is one of the richest countries of the world thanks to its bountiful oil and gas.

Rohingyas must go back to their homeland: Prime Minister