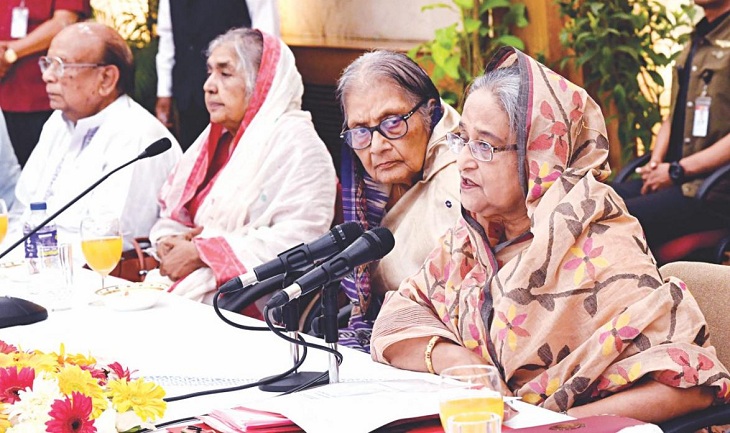 The people who construct buildings and use them should ensure that there are no incidents of fire, Prime Minister Sheikh Hasina said Friday.

She said whenever a fire breaks out, it is the fire service’s responsibility to extinguish the flames.

“But those who construct buildings, live in them and use them are responsible for ensuring that there’re no fire incidents in the buildings,” she said in her introductory speech at an Awami League Central Working Committee meeting at Ganobhaban.

The prime minister said it is very regretful that the builders, users and inhabitants of a building never discharge their responsibilities.

“And if anything happens everyone blames the government. We’re saying it time and again that are negligence on part of the builders, users and inhabitants,” she said.

Her comments came in the aftermath of a series of devastating fires at residential buildings and a market in the capital.

Bangladesh witnessed 8,461 incidents of fire at residential buildings last year and a quarter of these fires – 2,088 – were reported in Dhaka Division. Thirty-nine percent of the total reported fire incidents across Bangladesh were sparked by electric short-circuits, while 19 percent were caused by gas and 15 percent from cigarette butts.

Prime Minister Hasina criticised the tendency of blocking fire exits in high-rise buildings in the pretext of interior design or making warehouses.

She cited the beating up of firefighters and damaging fire-fighting vehicles by some people during the FR Tower fire. She also criticised people who gathered in front of the building and took selfies.

“I don’t understand what’s the point of taking selfies in the fire incident area.They could’ve thrown buckets of water rather taking selfies. They could have helped in the rescue operation,” she said.

The prime minister said people need to change their mentality and find way to help people during such incidents.

She thanked university students who were beside the FR Tower, the trained volunteers and common people for their quick response in rescue operation.

“I saw them perform their duties and hope that in future everyone will discharge their responsibilities this way,” she added.

Sheikh Hasina, the ruling party chief, said the people voted the Awami League to power for a third consecutive time thanks to the massive development over the last decade.

“People at the grassroots level are getting the results of the economic activities of the government,” she said.

The Awami League chief rejected various allegations raised by the BNP, saying the party had no intention of contesting the polls, knowing very well that people will not vote for them.

She also accused the BNP high-ups of involved in trading in the name of election. “They just sold their nominations," she said, adding that BNP had sold nominations papers to several aspirants for a single seat.

Hasina rejected the BNP’s claim that the government filed false cases against its leaders. “Not a single case is false,” she said, noting that cases have to be filed against those involved in arson attacks.

The Prime Minister recalled the destructive politics of the BNP-Jamaat nexus in 2013, 2014 and 2015 in the pretext of anti-government movement and resisting elections.

"We're spreading the economic activities in different parts of the country through establishing economic zones,” she said.

“In the coming days, no one will be the ultra-poor segment,” the prime minister said.

Don’t hike the price of essentials during Ramadan: PM