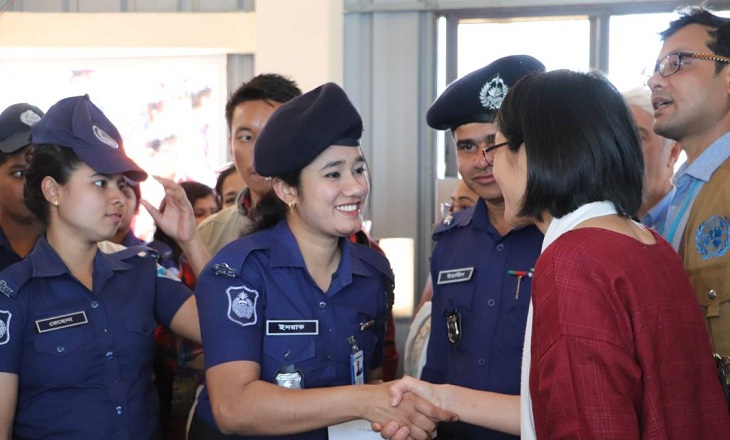 Cox’s Bazar police and UN Women have launched a Women and Children Help Desk, the first of its kind in Rohingya camps, at Madhuchara Police Camp-1 in Cox’s Bazar district.

The help desk service has been established upon the request of the Superintendent of Police in Cox’s Bazar with support from the Government of Germany.

The presence of female police officers in the camps is critical and comes in response to long-standing concerns raised about the safety and security issues of Rohingya women and children such as trafficking and domestic violence.

“We have not been able to approach anyone to report wrongdoings against us as women, however the existence of female police officers and the help desk now gives us confidence that the camps will be safer to live in, and law and order will be upheld”, said one Rohingya women leader.

A female police officer expressed their readiness in dealing with complaints received from the refugees, and along with ABM MasudHossain, Superintendent of Police, thanked UN Women and all partners for supporting the initiative.

Furthermore, she stressed on the need for other agencies to take similar initiatives to increase the representation of female police members in the Rohingya camps in Cox’s Bazar.

In December 2018, UN Women trained 55 female police, focused on procedures for handling Gender Based Violence (GBV) & Domestic Violence (DV) cases, management and reporting, collection of evidences with an emphasis on forensic evidence and victim-centered interviewing techniques for women and children who have experienced GBV/domestic violence.

order to strengthen overall procedures and to provide prompt services, UN Women in collaboration with Police, has established the ‘Women and Children Desk’ as part of the police station located in camp-4.