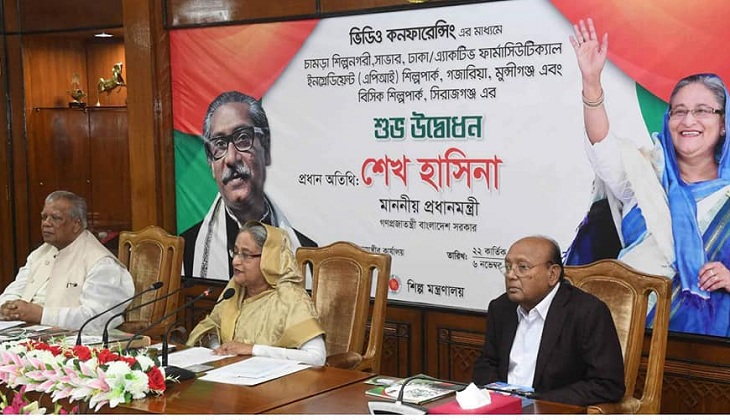 “We should always remember the pollution while setting up industries. So, we have to take active measures for waste management,” she said while inaugurating the industrial city through a video conference from Prime Minister’s Office (PMO).

After the inauguration, the prime minister exchanged views with Health Minister Mohammad Nasim at Sirajganj end and talked to the local parliament members, beneficiaries of different projects of the government, freedom fighters and government officials at Munsiganj and Savar end.

Mentioning steps taken by the government for industrial waste management, the prime minister hoped that all entrepreneurs of tannery industries would follow recommended procedures.

While inaugurating the API Industrial Park, the prime minister also underlined the importance of producing raw materials of pharmaceuticals in the country.

Bangladesh’s leather goods have a huge demand in foreign markets, the prime minister said, adding Bangladesh also export medicines to over 100 countries across the globe.

Sheikh Hasina said BSCIC industrial areas were established in every district after independence as decided by the government of Father of the Nation Bangabandhu Sheikh Mujibur Rahman.

Bangabandhu, as the industries minister in 1957, formulated the necessary act for flourishing small and cottage industries in this region.

Within three and a half years of the independence, Bangabandhu had taken steps for industrialization to create employment opportunities, enlarge export budget, enhance per capital income aimed at building a self-reliant economy.

Bangladesh would have been a prosperous nation much earlier if the tragic murder was not happened on August 15, in 1975, she said, adding that her government is following the path of Bangabandhu for overall progress of the country.

Sheikh Hasina said people are getting benefit of the development schemes taken by Awami League government since assuming power in 1996.

Bangladesh has become a developing nation in the last eight years, the prime minister said, adding that it is necessary to flourish industrial development for expediting agro-based economy of the country to continue the pace of development.

Bangladesh going ahead in every sector: Prime Minister

Navy to be made much stronger if AL voted to power again: PM

PM Hasina to hold press conference after dialogue with parties