US to play strong role in UNGA over Rohingya repatriation: Bernicat 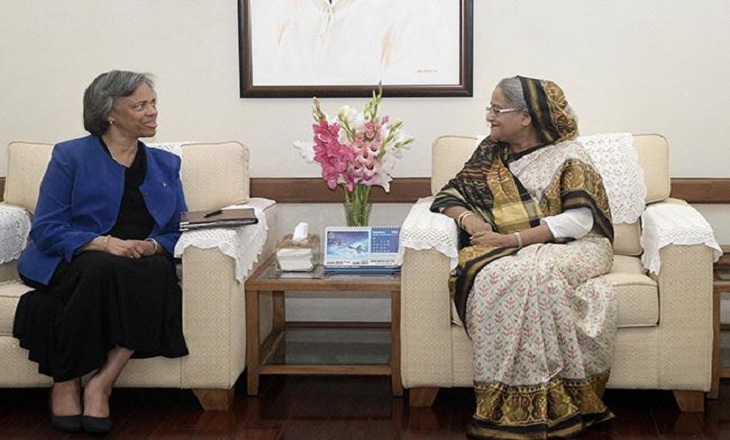 US Ambassador in Dhaka Marcia Bernicat on Tuesday said the US will play a strong role in the coming United Nations General Assembly (UNGA) for the repatriation of over 1 million Rohingyas living in Bangladesh.

The US envoy came up with the comment during a meeting with Prime Minister Sheikh Hasina at her official residence Ganobhaban.

He said Bernicat informed the Prime Minister that the USA will take the presidency of the United Nations Security Council in the coming UNGA. "The Rohingya issue will come up there and she (Bernicat) assured that they’ll be strong on the Rohingya issue," he said.The US Ambassador highly appreciated Bangladesh’s growth in the energy sector, saying her country is interested to invest in the sector and export LNG to Bangladesh.

The Prime Minister said the government has opened up all the sectors, including the energy one, to the private sector to create jobs.

About the upcoming general election, Bernicat said the USA wants to see a free and fair election in the country.

In reply, the Prime Minister said the AL government has taken numerous steps for holding free and fair elections in the country.

She mentioned that the ruling party candidates suffered defeat in many elections. "Even we suffered defeat by just 2000 votes, but there’s no manipulation from us," she said.

Sheikh Hasina said the ruling party is evaluating its candidates based on some criteria.

When the US Ambassador raised the issue of sending observers during the next election, the Prime Minister said the government will welcome the observers.