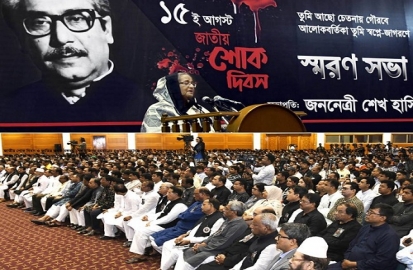 Prime Minister Sheikh Hasina today expressed her firm optimism against the return of killers reign saying the people of Bangladesh would not let the nation plunged into their grasp ever in future.

“Reign of killers will never return to Bangladesh . . . the people will not allow them to grab the power again,” she told a National Mourning Day discussion organized by Awami League at Bangabandhu International Conference Centre (BICC).

The premier, however, simultaneously sought people’s vigilance “as a vested quarter is genealogically conspiring against the country to play foul with the people’s fate”.

Sheikh Hasina was addressing as the Awami League president the discussion, which the party organized to mark Father of the Nation Bangabandhu Sheikh Mujibur Rahman’s 43rd martyrdom anniversary.

“Those who want to make their gain keeping the gun on children’s shoulder actually want to push the country to darkness,” she said in an oblique reference to vested groups’ infiltration to the young students’ campaign for road safety.

She said those who killed Bangabandhu and the four national leaders in their desperate effort to erase all spirit of the Liberation War “don’t want to change the people’s lot in this country” though the independence came under his leadership to change the lots of every downtrodden people.

“A group of people joined the war of liberation. But they had no faith in the spirit of the war,” the premier said.

Terming the carnage of August 15, 1975 as the most stigmatized day in the nation’s history the Prime Minister said such heinous crime didn’t happened second one in the world history.

“On this day the assailants killed not only the president of a country, but carried out the world’s most barbaric carnage . . . they killed innocent people, women and children in three houses in one night,” she said.

The premier said Bangabandhu had fully concentrated in building the country after independence and the country would have emerged as a developed one within ten years of independence had he been alive.

“But, being failed to thwart Bangladesh’s progress the anti-liberation forces started to hatch conspiracy and found with them the force which had no faith in Liberation War spirit,” she said.

As the leader of a new born country Bangabandhu needed few more years to build the nation recovering the damages caused by the war as such time was needed in many other newly emerged states in the world.

“But, unfortunately, a section of freedom fighters joined hands with the anti-liberation force. They could not understand the reality and became inimical to Bangabandhu government,” Sheikh Hasina said.

She added: “Their role created the ground for the history’s most barbaric act to take place on August 15, 1975.”

Sheikh Hasina recalled with grief that the country saw division among freedom fighters with the emergence of JSD in the political scene and they started criticizing Bangabandhu on all issues while “they started disliking his every action”.

“JSD started opposing the Father of the Nation using filthy languages. But, did they realize the consequences of their actions, how harmful it could be for the country’s independence?” she said.

The premier, however, said she believed JSD did not have that realization and otherwise they would have given Bangabandhu some time to consolidate the foundation of the independence.

Sheikh Hasina also recalled that immediately after assassinating Bangabandhu the killers renamed Bangladesh as Islamic Republic of Bangladesh like Pakistan and launched a vigorous hate campaign against Bangabandhu at home and abroad.

The top two perpetrators of Bangabandhu murder — Farook and Rashid — in an interview with British journalist Anthony Mascarenhas confessed that they killed Bangabandhu after their desperate attempts to make him unpopular through propaganda failed.

The premier identified Ziaur Rahman as the key shadow man behind the Bangabandhu murder saying Khandakar Mostaque appeared as the country’s president in line with Zia’s blueprint though the country’s constitution never permitted him to assume that office.

Sheikh Hasina said Major Dalim, one of the killers of Bangabandhu and Major General Ziaur Rahman and his wife used to come to Bangabandhu’s house almost every day.

“Was it part of the conspiracy?” she asked.