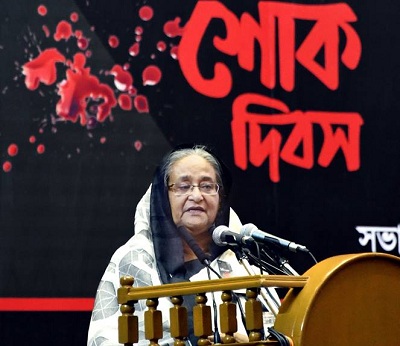 Prime minister Sheikh Hasina on Thursday said there is no doubt that BNP chairperson Khaleda Zia was also involved in the 15 August carnage conspiracy.

"Zia's wife (Khaleda) brought self-confessed killer of the father of the nation (Sheikh Mujibur Rahman) to parliament by rigging votes. What does it mean? It was not only Zia but also his wife involved in the conspiracy of the 15 August carnage. There is no doubt," Hasina said.

She came up with the allegation while addressing a discussion organised by Awami League at Bangabandhu International Conference Centre marking the National Mourning Day and the 43rd anniversary of martyrdom of gather of the nation Bangabandhu Sheikh Mujibur Rahman.

The prime minister said Ziaur Rahman had obstructed the investigation to the 15 August killing as he was fully engaged in the killing.