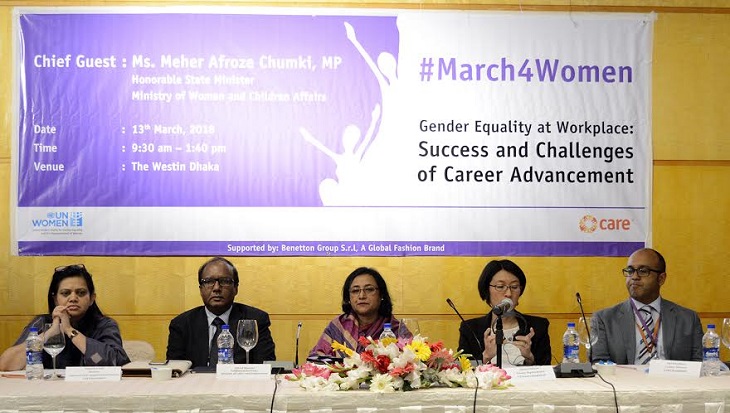 Speakers at a dialogue urged the government to take more effective measures in the policymaking level for advancement of the women in the country’s readymade garment (RMG) sector.

They said more training programmes should be undertaken by the government to train up the women for development of their leadership quality in the garment and other sectors.

“Although over 60 percent are female workers in RMG sector, only 4 percent of the supervisory posts are held by them in the garment factories”, said Shamima Pervin, a gender expert, while making her presentation on the sector at the dialogue jointly organised by UN Women and Care Bangladesh in association with Italian fashion brand Benetton at Westin Hotel in the city.

Speakers at the seminar observed that although the country’s RMG sector provides highest number of employments for the female workers, but it heavily lacks enabling environment for up-gradation of the women leadership in workplace.

Shoko Ishikawa said the garment owners have to change their mindset toward their female workers so that they can get proper training for promotion to the upper positions.

She said both the female and male workers have to work together to prevent women sexual harassment in their workplace.

Some of the speakers urged the government to incorporate the issue of sexual harassment in the labour law when it will be revised for amendment.

But opposing the idea, additional secretary of the Labour and Manpower Ministry Ashraf Shamim said it would not be wise to incorporate such issue in the labour law.

“Because, the existing law women and children harassment is strong enough to deal with the matter,” he said adding that if such issue is incorporated in the labour law, it may undermine the spirit of the law.

A mobile apps – Surakkha – was launched in the function to prevent the female workers from sexual harassment.