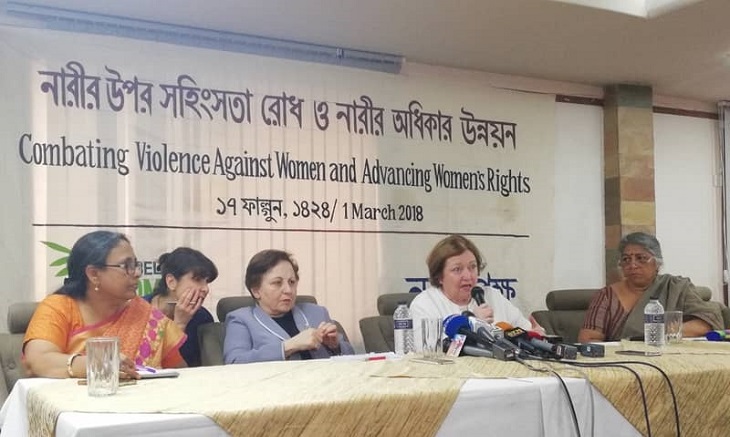 Shirin Ebadi, an Iranian Nobel laureate, has urged the womenfolk to get educated to change the patriarchal culture.

“And this is basically because men don’t want women to be literate and educated because once they become educated they’ll try and weaken this patriarchal culture,” she said.

The Nobel laureate said this while speaking at a programme titled ‘Combating Violence Against Women and Advancing Women’s Rights’ arranged by Naripokkho and Nobel Women’s Initiatives here on Thursday.

To eradicate this culture, Ebadi said, women should be made aware of the various ways in which this culture is actually established itself so that they can fight against it.

“I can think of many examples to give you but I want to keep this short as I want to focus on how we can stand up to this. And the way to do is through education. We’ve to raise awareness among women about this patriarchal culture. And it’s because of this we’ve noticed how fundamentalist men are so against education of women,” she said.

“Think of Malala and how she was actually shot by the Taliban because she wanted education, or Bokoharam in Nigeria how they attacked a girls’ school and kidnapped a number of girls. Have you ever asked yourself that why they didn’t attack a boys’ school kidnapping boys?” said Ebadi.

There is a discrimination against women all over the world , she said adding that in some countries it is less intense and in some it is more.

“I am just going to give you an example. I used to think that women, especially in Scandinavian countries, were in much better situation than the rest of the women until I attend a seminar in Denmark. And I noticed all the women in the seminar were wearing pins in their jackets and they also gave me one and they said that please wear it as a sign of solidarity with us. Now this pin was in the shape of a coin but only a quarter of a coin. Three quarters of the coin had been removed and they said it’s a symbol that men and women are doing equal work and yet they’re getting paid a fourth of what men are getting paid, “ she said.