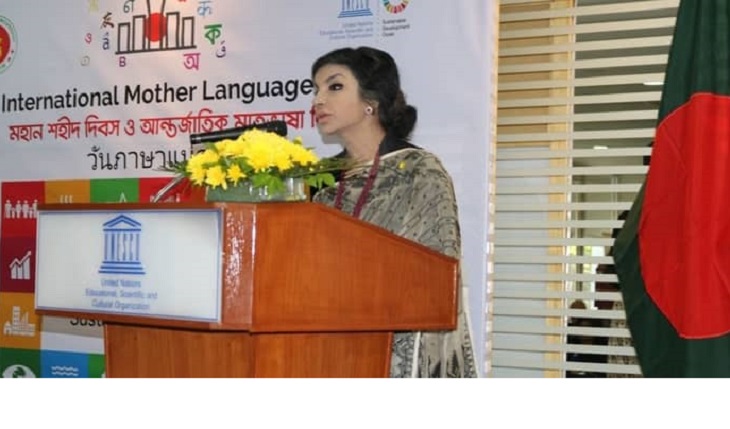 Regional Director of Unesco Asia-Pacific Maki Hayashikawa has highly praised Bangladesh and its Prime Minister Sheikh Hasina for pioneering the proclamation of February 21 as the International Mother Language Day at the Unesco in 1999.

The appreciation came at a commemorative event on the occasion of the ‘Language Martyrs’ Day’ jointly organised by Embassy of Bangladesh to Thailand and the Unesco Asia-Pacific Regional Office in Bangkok on Wednesday.

The Embassy organised a high-level panel discussion and a multilingual cultural programme on the Unesco Asia-Pacific Regional Office premises in Bangkok, where ambassadors and cultural performers of more than 20 countries presented multilingual presentations in their mother languages.

Paying her deep homage to the valiant martyrs of the Language Movement of 1952, Bangladesh Ambassador to Thailand Saida Muna Tasneem also paid tributes to the ‘immortal spirit’ and unrelenting leadership of Father of the Nation Bangbandhu Sheikh Mujibur Rahman throughout the Language Movement between 1948 and 1952, including from his prison cell.

She also called upon the Unesco and other regional institutions in the Asia and Pacific to collaborate with the International Mother Language Institute established under the patronage of Prime Minister Sheikh Hasina in Dhaka in 2000 towards its capacity-building for preserving and researching more than 7000 languages of the world.

Praising the leadership of Prime Minister Sheikh Hasina and role of diaspora in securing recognition of February 21 as the International Mother Language Day at the Unesco, Ambassador Tasneem also called for awareness and special care by diaspora in teaching mother tongue Bangla to expatriate children while promoting their multilingual skills to foster cultural diversity.

Earlier in the morning, the national flag was hoisted at half-mast on the Chancery premises by the Ambassador to pay homage to the language martyrs and messages of President Abdul Hamid, Prime Minister Sheikh Hasina and Foreign Minister AH Mahmood Ali issued on this occasion were read out to the audience.

A special prayer was offered for eternal salvation of the departed souls of the martyrs of the Language Movement.