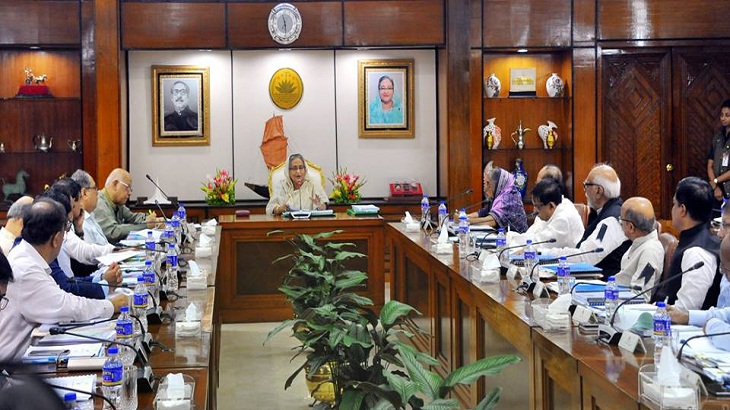 A proposal to this end was approved in the fourth meeting of the National Committee on Environment held with Prime Minister Sheikh Hasina in the chair in her office here yesterday.

The national committee on environment also adopted a proposal in principle to allow environment friendly industries in the ecological critical areas in Mongla and Sundarbans areas, the press secretary said.

Addressing the meeting, the Prime Minister, also the chairperson of the national committee on environment, underscored the need for achieving the Sustainable Development Goals (SDGs) through planned development protecting the cultivable land, forests and water bodies.

She said green afforestation has to be expanded in the coastal and northern region of the country to protect environment.

Sheikh Hasina particularly asked the authorities concerned to intensify efforts to keep the four surrounding rivers of the capital free from pollution saying the rivers would die if they are not freed from waste and pollution.

The Prime Minister put emphasis on ensuring ETPs and STPs in the industries alongside improvement of the sewerage system. Environment is one of the prerequisite for sustainable development, she said adding that Bangladesh is not responsible for climate change, but it is one of the worst victims.

Referring to the successful implementation of the Millennium Development Goals (MDGs), she said that the country also needs to show the same success in achieving the SDGs.

The Prime Minister also renewed her directives to keep water bodies in implementing housing and industrial projects for environment protection as well as facing any disaster like fire incident.

Regarding the recent trend of excessive rain in the country the prime minister said though people had to suffer a lot due to the heavy rain, this also helped free the rivers from pollution, reduce salinity and recharge the underground water level.

She also alleged that the canals and lakes in the city were devoured in various times except the tenure of the Awami League which is responsible for the water logging.

Terming the Sundarbans as a gift from Almighty Allah, she said her government has taken many steps for protection of the forests which has created employment opportunities for local people who lived on illegal timber collection and wood cutting.

She said that Bangladesh is one of the first among least developed countries to form the Climate Change Trust Fund without relying on others to face the adverse impacts of climate change.

Besides, the Environment Court Act was enacted in 2010. Recalling the contributions of Father of the Nation Bangabandhu Sheikh Mujibur Rahman for protection of the environment, she said that Bangabandhu had worked on environment and safe water issues while he had also promulgated the Water Pollution Control Ordinance in 1973.

Besides, the Jhao (tamarisk) forest was created in Cox's Bazar under the direct initiative of Father of the Nation while he had also started work for afforestation at Nijhum Island and Char Monpura alongside releasing animals and birds there.

The Prime Minister lamented that the actions of the subsequent governments after 1975 destroyed the environment. For example, she said Ziaur Rahman had cut down most of the larger and beautiful trees in the city during his regime.

People to bring AL back to power: PM