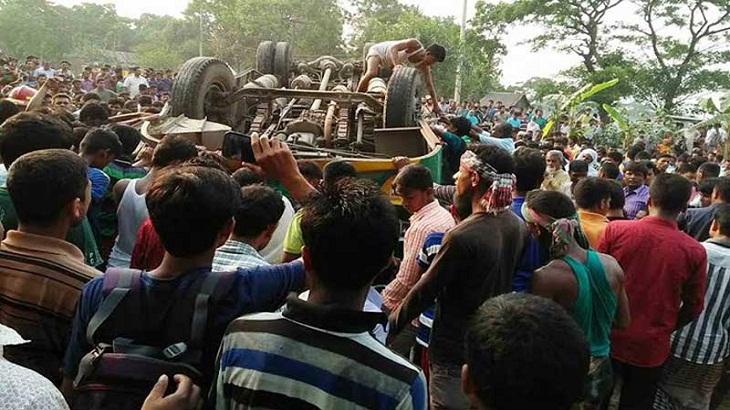 Sixteen homebound garments workers were killed and seven others injured in a fatal road accident at Kolabagan point on the Dhaka-Rangpur highway under Pirganj upazila here today, police and hospital sources said.

"The accident occurred at 4:45am when a Lalmonirhat bound cement-laden truck from Dhaka skidded off the road and fell into a roadside ditch as its driver lost control over the steering," said in-charge of Barodorga Highway Police camp Hafizur Rahman.

"Eleven garments workers, including four females, of Kaliganj upazila in Lalmonirhat district were killed on the spot after being buried under cement bags," he said.

He said the ill-fated garment workers boarded the cement-laden truck at Chandra Mour point on the highway in Gazipur district on way back homes to celebrate the Eid-ul-Fitr.

Officer-in-charge (OC) of Pirganj Thana Rezaul Karim said four units of the Fire Service and Civil Defense rushed to the spot soon after the accident, recovered the bodies and injured persons and completed rescue operation within a couple of hours.

BSF guns down 2 Bangladeshis, picks up 2 others

Landslides death toll climbs to 137 in Rangamati, Bandarban and Chittagong