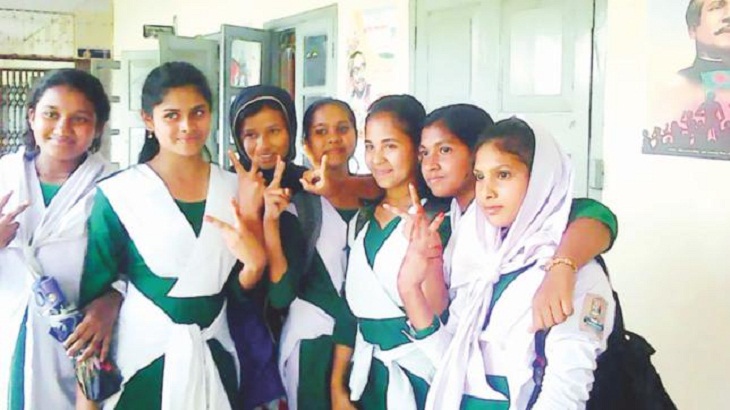 Child marriages are an uncomfortably frequent occurrence in parts of the country today. Fortunately, some have decided that talk is indeed cheap and it is time to act.

Recently, against all odds, seven adolescent girls from the remote Nandail upazila of Mymensingh showed enormous courage when they stopped the early marriage of two of their classmates. Their act was one of timely defiance and served as an inspiration for those around them.

Uniting under the banner of the forum Ghashphool, formed at their Nandail Pilot Girls High School in 2015, the pupils turned discussions into action and led right from the front. Their success resonated with their classmates and other adolescents in the area while their parents and elderly neighbours also praised them for their bravery.

The spectacular seven are Tuli Devnath, Sanjida Islam, Rezwana Tabassum and Sneha Barman of Class-IX, and Jebunnesa Khanam Shyama, Jannatul Islam and Jerina Sultana of Class-VIII. Their tales are soon becoming the stuff of lore, whispered across the town, in tones once hushed now steadily amplifying.

It all began when the seven stopped the marriage of Nadira Akhter Panna, a ninth-grader scheduled to get married on April 11. They followed this up with preventing the illegal union of seventh-grader, Monwara Begum, scheduled for marriage on April 16.

However, their story doesn't end there. The seven are involved in actual grassroots empowerment of women in the area and exemplify how to stand up for oneself. The forum members, led by Tuli, also work to create awareness against stalking, having received training under a project of World Vision Bangladesh.

The seven also benefit from a great support system. Team leader Tuli said their teachers and the local administration helped them enormously in stopping the marriages. When queried how they went about it, she said that first they got primary information about the incidents from fellow students at school. They then discussed with their headmaster Abdul Khaleque how to foil Monwara's marriage on April 15, said team member Sanjida.

Later, they went to Monwara's house at Chandpur village of Achargao union but failed to convince her parents. The headmaster then informed Upazila Nirbahi Officer Hafizur Rahman who asked Officer-in-Charge Ataur Rahman of Nandail Police Station to take the necessary steps.

Monwara's father, Abdus Salam, a marginal farmer, was called to the police station and convinced to change his mind after being explained the very real negative consequences of child marriage. “Later he agreed with us,” said Sanjida.

Sneha, another forum member, said they came to know about the marriage of Nadira, daughter of day labourer Chand Mia of Dashalia area of Nandail municipality, on April 10. She was set to get married to a pick-up van driver. The team immediately rushed to Nadira's house and tried to convince her parents to stop the marriage but they did not listen.

The girls then went to Nadira's house again the next morning where they saw that wedding preparations were underway. Sensing that little time was left, they informed headmaster Khaleque about the matter. The headmaster then informed UNO Hafizur who directed Upazila Women Affairs Officer, Romana Akhter, to visit the spot with the girls. “We reached the spot at noon and saved Nadira,” Sheha added.

For the girls though, while their intentions were noble, their first struggles began at home. Ghashphool member Rezwana said she initially had to face many obstacles from her family members. Now though, they were proud of her.

Locals are also praising them, said the ninth-grader, adding that other girls at her school had expressed interest in joining them. “I'm very proud of my daughter,” said Tuli's mother, Nipa Devnath, referring to her daughter's lead role against child marriage.

Meanwhile, Nadira's father, Chand Mia, said he realised his wrong decision after the girls made him understand about the ills of early marriage. “Now I'm focused on my daughter's education,” said Nadira's mother, Jotsna Begum. An elated Nadira said, “It is great that I'll be able to go to school again.”

Praises for the girls though don't end just for their recent actions; the girls are truly unique in almost every aspect. Headmaster Abdul Khaleque said the seven girls, who are from middle and lower-middle class families, are very good in their studies and skilled in co-curricular activities.

This is despite the predicament many of them had gone through. Assistant teacher, Afroza Parvin, said Tuli lost her father at the age of two. She passed her Junior School Certificate exam with a golden GPA-5 and also secured scholarship. Tuli's other feathers in her cap come from singing and having received upazila- and district-level prizes in dance competitions, said the teacher.

They were accorded with a reception at the UNO office on April 13 for their contribution. UNO Hafizur said the girls carried out an important task and stressed the need for similar types of work to be done in other parts of the upazila.

Nandail Municipality Mayor Rafiq Uddin Bhuiyan further said the job done by the girls had made locals aware about the curse of child marriage. “What they did should be done by public representatives, administration and police first,” he said.

The girls though decided a long time ago that they couldn't wait for help any longer. They would blaze their own trail and so they did and continue to do so.