Hasina to speak of militancy in Arab-American summit 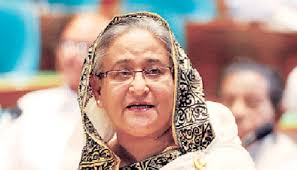 Prime minister Sheikh Hasina is expected to put forward a number of proposals in the upcoming "Arab-Islamic-American Summit" to be held in Riyadh on 21 May on how to work together to face the global challenges of terrorism and militancy.

She will also focus on Bangladesh's firm stand against this menace and the country's successes in curbing terrorism and militancy for ensuring peace and stability.

US president Donald Trump, heads of state and government of the member states of Gulf Cooperation Council (GCC), Arab world and other Muslim countries will join the summit.

This will be Trump's first visit to the KSA since he assumed office as the 45th president of the United States of America last January.

The issues relating to prevent global militancy, Palestine crisis and the present geo-political developments in the region and beyond would be discussed prominently in the summit, said foreign minister AH Mahmood Ali on Thursday while addressing a press briefing ahead of the premier's Saudi Arabia visit.

"The main objective of the summit is to establish new partnership to face the challenges of global terrorism and militancy, expand values of tolerance and coexistence and strengthen efforts for ensuring peace and stability," he said.

The foreign minister said prime minister Sheikh Hasina will visit Saudi Arabia from 20-23 May to join the summit at the invitation of the custodian of the two holy mosques and Saudi Arabia's King Salman bin Abdulaziz Al-Saud.

Responding to a query, the foreign minister told the newsmen that it is premature to describe it as an "Arab-Islamic-American Alliance" as it has not yet turned into such a platform.

On another query, he said if needed, Bangladesh will send its troops to Saudi Arabia to protect the two holy mosques in that country.

"If there is any threat, we will do it considering the sentiments of our majority people and the respect they show to the holy places," he added.

The foreign minister said the Bangladesh prime minister's Saudi visit would play an important role for further enhancing bilateral and multilateral ties between the two countries and other Muslim countries attending the Summit.

He said, the premier will leave Dhaka for Saudi Arabia on Saturday evening. After, joining the summit, she will offer Munajat at the Rawza Shrif of Prophet Muhammad (SM) in Madina on 22 May and perform "Umrah" in Makkah.

State minister for foreign affairs Mohammed Shahriar Alam and foreign secretary Md Shahidul Haque, among others, were present on the occasion.

Prime minister Sheikh Hasina is expected to return home on 23 May.

Haor people to get fresh agri loan at 4.5 pc: PM

Country’s no region to be left behind: Prime Minister Sheikh Hasina