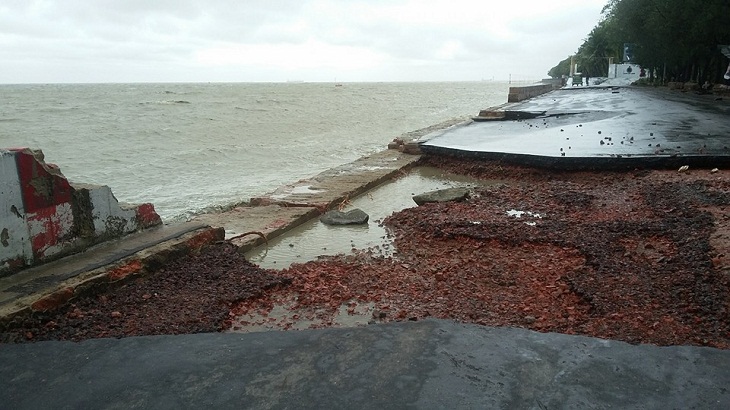 Death toll overnight rose to 24 as tropical cyclone codenamed Roanu ravaged Bangladesh's southern coastlines where it made a landfall at midday yesterday with a wind speed of over 80 kilometres per hour, triggering tidal surges and landslides.

He said 11 people including minor children alone were killed in and around northwestern port city of Chittagong, which appeared to have suffered the worst brunt of the cyclone.

The disaster management department chief said the southwestern Bhola and northwestern Noakhali and Cox's Bazar coastal districts each witnessed three deaths while the storm damaged entirely or partially 85,000 homesteads and business structures along the coastlines.

Officials and volunteers at the battered areas earlier said several of the victims drowned in inflated waters caused by surges while landslides,collapse of houses and uprooted trees killed others.

He said all the seven were drowned in inflated waters caused by tidal surges or in landslides triggered by incessant downpour under the influence of the cyclone.

A disaster management ministry spokesman earlier said some 500,000 people were evacuated to cyclone shelters though preparedness was there to take to safety some 21,00,000 people in 14 of the 18 coastal districts.

Officials at the coastlines who were reached in Dhaka by phone said the cyclone breached several coastal embankments meant for preventing tidal surges washing away infrastructures and standing crops.

They said strong winds which accompanied the surges uprooted a huge number of trees and electric poles disrupting power supplies in large areas stretching from the south-western to south-eastern coastlines inundating neighbourhoods under 4 to 5 feet tidal surges.

Meteorologists said the cyclone first hit the south-western coast and then proceeded towards the southeast turning the sea very rough.

Experts said the casualty figure appeared less than it was feared as it hit the coast in day time while the government ordered a massive evacuation campaign after the met office on Saturday turned its "local warning signals"to "danger signals" for all its four seaports, covering the entire coastlines.

Some 50,000 trained volunteers, several thousand Red Crescent volunteers and boy scouts were prepared to join the campaign while the authorities earlier scrapped Friday and Saturday's weekend holidays for public employees in 18 coastal districts.

The main port of Chittagong, earlier, internally issued a "red alert" ordering ships to immediately leave the port and anchor in the outer
anchorage for the safety of the facility and asked the lighterages to take shelter in river banks inside the mainland.

Bangladesh is vulnerable to cyclones because of its location at the triangular shaped head of the Bay of Bengal, the sea-level geography of its coastal area and its high population density while two deadliest cyclones occurred in 1970 and 1991 claiming some 500,000 and almost 140,000 lives respectively.

But during the past 20 years, the country managed to reduce deaths and injuries from cyclones while the most recent severe cyclone of 2007 caused 4,234 deaths, a 100-fold reduction compared with the devastating 1970 cyclone, according to experts.