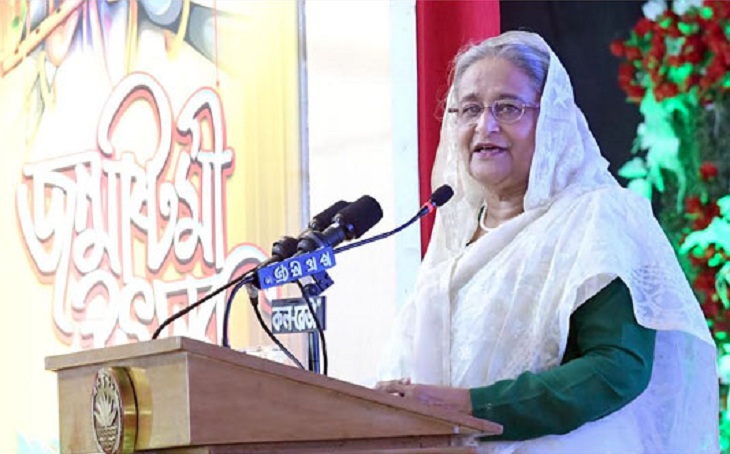 “The BNP government had made (ill) efforts to create religious differences among the people. But Awami League never believes in such differences … the party thinks that the country belongs to all,” she said.

The prime minister made the remarks while exchanging views with leaders of the Hindu community at her official Ganabhaban residence here this afternoon on the occasion of Janmashtami, the birthday of Lord Sri Krishna.

Sheikh Hasina went on saying: “This land is yours, this country is yours and it’s your birthplace. Why you don’t have such a belief? … I feel very bad when I hear it.”

Pointing out the prevailing communal harmony in the country, the premier said the people of all faiths have equal rights in Bangladesh.

“Everybody will get equal rights in each field we’ve ensured it. Religion is for individuals, but festivals and state are for all we’ve proved it,” she said.

Sheikh Hasina said the people irrespective of religion, caste and creed are celebrating every festival in the country together. “We’ve been able to ensure this,” she said.

The prime minister said with the assassination of Father of the Bangabandhu Sheikh Mujibur Rahman, Bangladesh had lost all potentials.

“The only aim of those who carried out the massacre in 1975 was to foil the spirit of the liberation war and turn Bangladesh into a failed state,” she said.

Sheikh Hasina added: “The goal of the killers and anti-liberation forces who grabbed power at that time was so that Bangladesh cannot be developed after being separated from Pakistan.”

The prime minister said she had a pledge that anyhow the country will be taken to the path of development and dream of Bangabandhu will have to be materialized.

The prime minister said the people irrespective of religion, caste and creed fought for independence together under the leadership of Bangabandhu.

“They took part in the war to enable all to enjoy equal rights and it had been incorporated in the constitution that the Father of the Nation presented to us after independence,” she said.

Sheikh Hasina said secularism does not mean no religion and its meaning was that the people will perform their respective religions freely.

The prime minister also reminded all about the catastrophe that had to be endured by the people of different religions including Hindus, Christians and Buddhists due to atrocities perpetrated on them after the 2001 general elections.

Elaborating various steps of her government for the welfare of the members of the Hindu community, Sheikh Hasina said the government has already introduced temple-based child and mass education programme in every upazila under the Hindu Religion Welfare Trust.

“The ‘purohit’ and ‘sebayet’ are being imparted training for increasing their efficiency,” she said.

Sheikh Hasina said that the government constituted the Hindu Religion Welfare Trust for the welfare of the Hindu community where about Tk 100 crore have been deposited.

In this connection, the prime minister requested the well-off section of the Hindu community to donate to the trust. “Through it you can raise the fund and help the poor and distressed … it is a responsibility of all to increase the amount of money of the trust,” she said.

Sheikh Hasina said Lord Krishna used to believe in the principle of punishing the evils and nurturing the good as well as human religion and welfare. “He appeared for the human welfare,” she said.

Hasina, Modi likely to meet in NY before Delhi talks in Oct