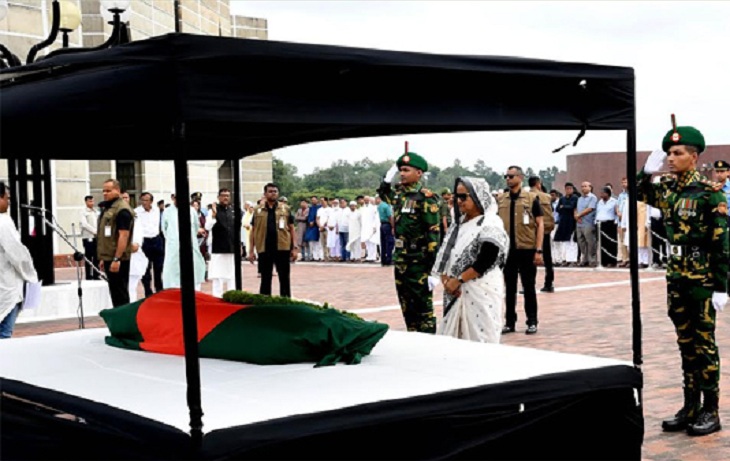 After placing the wreath on Saturday morning, the Awami league chief stood in solemn silence for some time, as a mark of profound respect to the memory of Muzaffar Ahmed, a close friend of Bangabandhu Sheikh Mujibur Rahman.

Earlier, Muzaffar Ahmed, the chief of National Awami Party (NAP), died at a hospital in the capital on Friday night.

The 98-year-old was admitted to hospital recently with old age complications.

He breathed his last around 7:50pm while being treated at the ICU of Apollo Hospital, his niece Anwara Begum said.

The first namaz-e-janaza of Muzaffar Ahmed, who was part of the wartime Bangladesh government in exile and a close friend of Bangabandhu Sheikh Mujibur Rahman, will be held on the South Plaza of Jatiya Sangsad at 11:00 am today.

Following the janaza, his body will be kept at National Awami Party’s (NAP)  central office in the capital to enable his party men and general people to have the last glimpse.

Later, his body will be kept at the central Shaheed Minar at 12pm for the people to pay their last respects.

Afterward, his body will be taken to his own village in Debidwar upazila of Cumilla for burial following his 2nd namaz-e-janaza at Baitul Mukarram National Mosque after Johr prayers.

Muzaffar, born on April 14, 1922 in Debidwar upazila of Cumilla, taught at Dhaka College and Dhaka University. He took part in the 1952 Language Movement.

He was one of the organisers of NAP, CPB and guerilla force of the student union. After the independence, he was elected an MP in 1979 and contested the 1981 presidential polls.