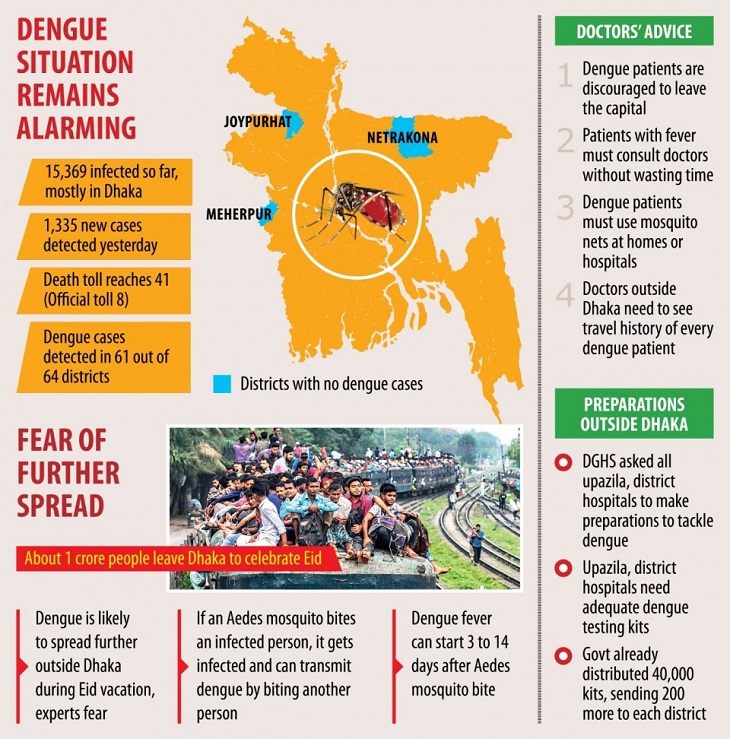 After the dengue outbreak spread to almost every district in the country, health experts now fear the viral fever will spread further and faster during Eid vacation, when tens of thousands of people are expected to head home.

Many of these holidaymakers might be infected with the mosquito-borne virus, and they may end up spreading it quickly if adequate measures are not taken, doctors and experts said.

For example, if a non-infected Aedes mosquito in a remote village bites an infected person, that mosquito in turn will infect other people, they warned.

Government and private hospitals in the capital are already struggling to cope with the pressure, and a further spread will make things worse. That is because neither the hospitals nor the doctors are prepared for a large-scale outbreak, according to the experts.

Besides, many hospitals outside Dhaka do not have the kits to run the NS1 test to detect the fever.

In Barishal, for example, none of the 43 public health facilities, including the 34 upazila health complexes, have the testing kits, said Shymal Krishna Mandal, assistant director of the Divisional Health Directorate.

In the absence of the kits, doctors there are only looking at the platelet count for diagnosis, said Shymal, also the civil surgeon of Jhalakathi.

The Directorate General of Health Services (DGHS) has distributed around 40,000 kits to different hospitals in and outside Dhaka. It will gradually send 200 kits to each district hospital.

“High transmission period of dengue virus is going on and it may spread the dengue outside Dhaka during Eid. It is a matter of grave concern,” said Kholilur Rahman, chief entomologist of DGHS.

As of yesterday, the disease spread to 61 districts with at least 15,369 infected, mostly from the capital, according to DGHS data.

Since a lot of people will be travelling home during Eid, the government should ensure NS1 kits at all district and upazila hospitals, he said.

Meanwhile, four more people, who had been diagnosed with dengue, died in Dhaka and Barishal yesterday. With them, at least 41 people have now died after being diagnosed with the disease, said hospital sources.

The DGHS put the death toll at 8 last week, and has not revised the count since.

HM Nazmul Ahsan, associate professor at Shaheed Suhrawardy Medical College Hospital, said many of the dengue patients diagnosed outside Dhaka had actually been infected in Dhaka.

Dengue fever starts 3 to 14 days after being bitten by an Aedes mosquito.

“So, for example, if a person starts for home today after being bitten, he can a have fever anytime after 3-14 days. Therefore, we need to be very careful. If possible, infected people should not visit their village homes,” said Nazmul, one of the experts who prepared a national guideline for clinical management of dengue.

A DGHS official said they already dispatched some 150-200 kits for each district hospital, although they could not yet send the kits to upazila hospitals.

Mahmudur Rahman, former director of Institute of Epidemiology, Disease Control and Research, discouraged people from travelling outside Dhaka if they have a fever.

“Even if a person goes outside Dhaka with fever, he or she will have to remain under mosquito net most of the time for at least seven days so that it cannot spread,” he said.

Mahmudur suggested that hospitals and doctors make preparations as early as possible to avoid a further spread.

An infected person develops an antibody usually after seven days, when he is considered risk-free.

MM Akhtaruzzaman, manager of malaria and dengue programme of DGHS, said they started training doctors at the district level.

“We’re giving priority to districts adjacent to Dhaka. We will then go for other big cities and districts,” he said.

DGHS Director General Abul Kalam Azad said there would be no crisis of kits as many local companies were making them.

Dengue fever is comparatively higher than the previous